California has had Title 20 energy efficient laws since 2006, but only now is the legislature passing a law to enforce those standards.
Posted by Clint Combs at 7:28 PM No comments:

First, there are some things you should be aware of before you start programming:
• The Filter Pump button will only work in the Auto mode. It will not turn the pump on in either Service or Timeout mode. For those familiar with EasyTouch controllers and single speed pumps, this is unusual. For this reason, it is nice to set up an Auxiliary button to turn the variable speed pump on to a speed that is appropriate for vacuuming or running an auto cleaner. Your pool service person will need this.
• The pump will often be told conflicting directions as to what speed it should run at. For instance, a program may call for one speed and the heater may call for a different speed. If there is a conflict between two different speeds, the pump will always run at the higher speed.

Conceptual programming strategies:
• You will want to program the “Pool” to run at the slowest speed that you want the pool to run at. If you do this, you will not need to set up an additional “low speed” speed/schedule.
• You will want to set up a “Feature” (Feature 1—for instance) to run at a medium to high speed. At scheduled times during the day, this feature will ramp up the pump to a sufficient speed to operate an auto cleaner for a couple of hours a day. You will set the time for this in Schedules and the speed in the Intelliflo menu.

Assign the Speeds in the Intelliflo menu under Settings:

Use your smart phone to operate your pool 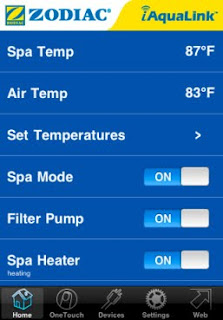 Zodiac (the makers of the Jandy Aqualink RS and PDA lines of control systems) is introducing an iAquaLink App in the first quarter of 2012 that will allow a pool owner the ability to control their pool equipment from their iPhone, iPad, or Android device.

Use of the app requires installation of the appropriate iAquaLink Web Connect Device (there will be three to choose from). This device upgrades the power center so that it can communicate with a router (either hard wired or wirelessly).
Posted by Clint Combs at 11:06 AM 5 comments:

Now until June 1, 2011 the Los Angeles Department of Water and Power is offering a $1,000 rebate for customers who install a variable speed pump. This is much higher than So Cal Edison's $200 rebate.

See Pentair's announcement for details, or go to the DWP website.
Posted by Clint Combs at 5:41 PM No comments: